Why we love Ultramarine 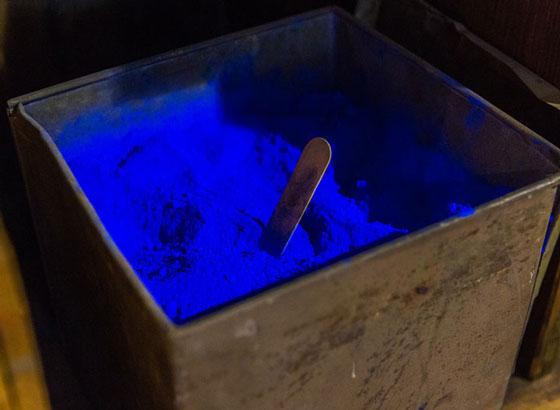 Blue, the color of the sea and the sky, has always had the status of a special color. But which of the many shades of blue are we referring to? A closer look leads us straight to ultramarine, whose singular status is reflected in the fact that there have always been artists, writers, and scientists who could not escape its magic. Famous works of art and fabulous stories have been dedicated to this fascinating blue. I take up a few in this blog post, limiting myself to the following aspects: 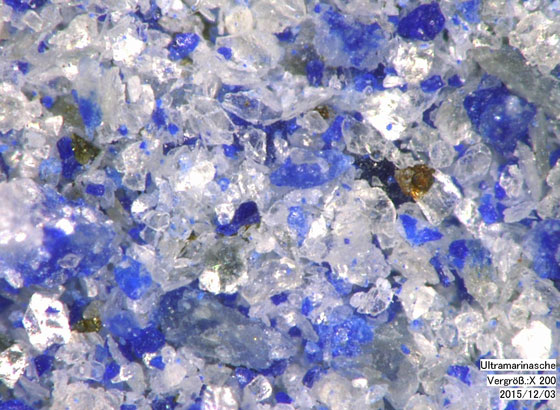 Naturally occurring ultramarine is called lapis lazuli. Lapis means "stone" in Latin, lazuli is derived from the Persian word lazuward for "sky blue" and lapis lazuli simply means "sky blue stone".[i] Afghanistan is the most important source for this volcanic, semi-precious gemstone. It was described by Plato, Pliny, Theophrastus, and Cennino Cennini. The rare gemstone, which reached Europe "from across the sea", is the only lightfast, natural blue pigment. It is a geothermic blend of three minerals: deep blue lazurite, iron pyrite (fool's gold), and calcite (crystalline marble). The extraction of a high-quality pigment involves separating the lazurite from the other minerals – a complex process. The finely ground stone must be kneaded with resin, oil, and wax in lye and repeatedly doused with hot water, whereby the blue pigment is extracted from the blend with the water.
The earliest known uses of the pigment were found in the Afghan Ajanta caves in the 6th century AD. In the West, high-quality lapis lazuli appears in manuscripts and in religious paintings from about 1200.[ii] In the Middle Ages, the robe of the Virgin Mary was painted with lapis lazuli. Johannes Itten and other color theorists have suggested that this may have been due to the spiritual, celestial quality of the blue color. More profane authors suggested that the high cost of the pigment was the attraction. Before the era of luxury watches and vehicles, how to show great wealth if not with lapis lazuli, which was more expensive to purchase than gold?[iii]

Stones with low levels of lazurite, as well as the final, slightly blue-gray extraction residues, can be processed to a pigment called “ultramarine ash”. They are too gray to be used for gemstones, but precisely their delicate, grayish-blue color has turned ultramarine ash into an indispensable pigment for our paint formulations. We have created a series of captivatingly luminous, subtly light-reflecting paint colors with this unique, natural pigment. 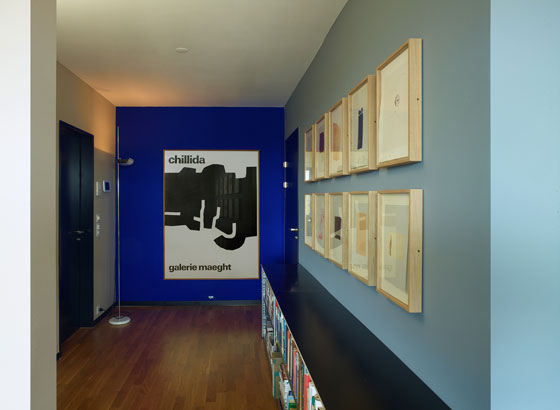 Bad weather and the lively pirates’ trade made transportation across the Mediterranean rather dangerous, wars in Afghanistan disrupted trade routes, and low pigment yields drove up the prices. The "Société d'encouragement pour l'industrie nationale" in Paris wanted to put an end to the shortages and offered in 1824 to pay the generous sum of 6,000 francs for the invention of a manufacturing process for synthetic ultramarine pigment.[iv] Almost simultaneously, in 1928, Gmelin in Tübingen, Guimet in Toulouse, and Köttig in Meissen discovered processes to produce ultramarine from quartz, china clay, soda, charcoal, and sulfur. The prize went to the Frenchman, but all three founded firms that produced ultramarine. The synthetic pigment was marketed for 400 francs, an extremely profitable business, considering that the raw materials were almost free and the trade routes easy.[v] From about 1840, ultramarine was not only on every painter's palette, it was also the "laundry blue" in every detergent. 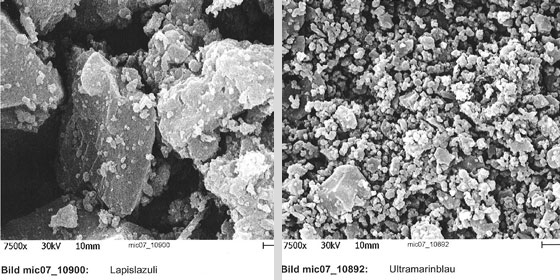 Synthetic ultramarine is about 99% pure in terms of pigment content, but lapis lazuli weighs in at about 20%. The composition of the blue pigments is the same, but in lapis lazuli, the crystals are considerably larger and interspersed with other minerals, which is not the case with ultramarine. See the comparison, which shows both pigments at the same magnification of 7500x. The pigments differ significantly in their microscopic structure, and the primordial lapis lazuli particles are much larger than the ultramarine particles.

This allows the natural pigments to mirror light rays better than the smaller nodules of synthetic ultramarine. Light penetrates deeply into the tunnel-like pores of the natural pigment, from where it is mirrored back by underlying crystals. This lends lapis lazuli paints a heavenly, light effect and a sparkle, which is warmer and gentler than that of paints made with synthetic ultramarine. Ultramarine paints have a more dramatic, bolder effect though, making them look deep and mysterious. 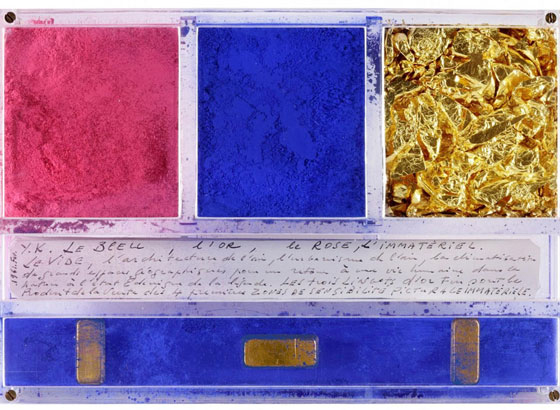 Ultramarine defies the usual categories of description. When artists, such as Kandinsky, Matisse, Rodschenko, and Piet Mondrian, first separated color from form and granted color a new autonomy, ultramarine was inevitably on their palettes. It was their extreme example of a color capable of triggering independent, mental processes. But it was Yves Klein who elevated this "visible sign of infinity"[vi] to a new category of art. Neither brushstrokes nor binders were to cloud the pure experience of color. Edouard Adam, a chemist in Paris, developed a PVAc-based binder for Klein that permitted maximum pigment uptake. The color "International Klein Blue®" was made of this binder, synthetic ultramarine, solvent, and nothing else. Contrary to a persistent and often-cited rumor, Klein never patented the blue (paint formulations cannot be patented).[vii] He registered the binder with the French Institute of Intellectual Property and patented the process of making art with the pigment. His patent FR 1258418 bears the unwieldy title "Procédé de décoration ou d'intégration architecturale et produits obtenus par application dudit procédé", roughly "Process for decoration or architectural integration and the products obtained by applying this process". The famous "anthropometries”, for example, were the results of body impressions left on canvases by glamorous nude models coated with the blue pigment. These works were a sensation at the time. They still are. 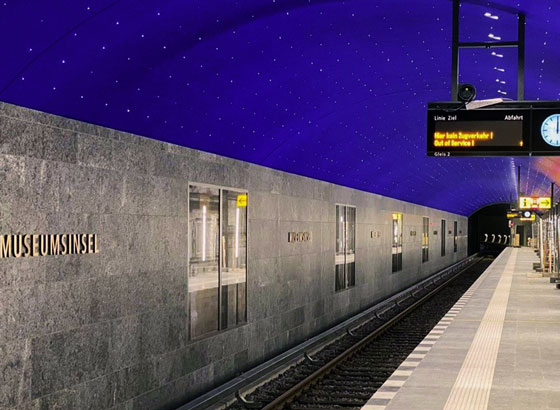 The Edouard Adam formulation was based on a solvent-based PVAc-polymer solution made by Rhône-Poulenc, to which the same amount of ultramarine pigment was added. After solvent evaporation, the sought-after matte, powdery color layer was rendered visible. About 50 years later, we were commissioned by the artist André Heller to develop a new solvent-free formulation for the paint. After countless trials with water-based, eco-friendly successors to the binder, we had developed a formulation for a blue as deep and stunningly blue as its famous predecessor. 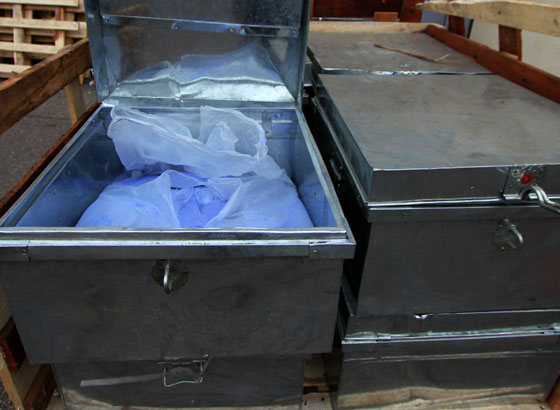 Pigment quality is crucial to the quality of any paint color. Both lapis lazuli and ultramarine, however, are difficult to find in the superior quality we require. The explosive political situation in Afghanistan makes it difficult for gemstone dealers to do business. None of them stay there long and we must find new suppliers frequently. Crates filled with stones from Afghanistan also run the risk of being held by Swiss customs authorities, who inspected them for weapons. We are happy if the time span from order to delivery is less than two years. This patience is also necessary for synthetic ultramarine, but for a different reason. The blue is mass-produced in large ceramic kilns for use as a brightener for dishwasher tabs and laundry detergents. The manufacturers of these goods allow color variations that we cannot tolerate. We are sent a sample of each production batch, which we check for depth and hue. As soon as a batch meets our requirements, we purchase the entire quantity. About every three years, we find what we are looking for. 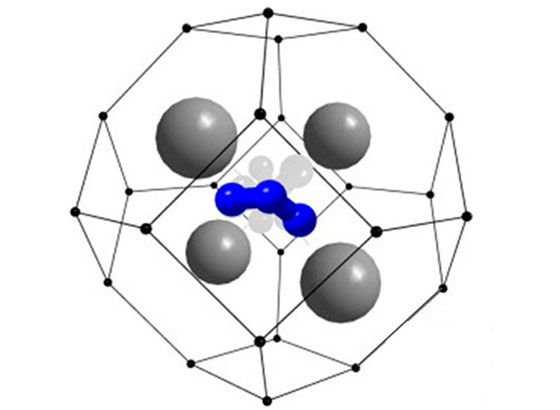 Ultramarine and lapis lazuli owe their intense blue color to a sulfur anion held within an ordered crystal lattice.[viii] Not all of the lattices have such a core, and the higher the sulfur content, the bluer and more valuable the pigment. As it turns out, this sulfur radical anion is chemically like the ozone in the sky, which is a light blue gas. Both ozone and the ultramarine sulfur core possess electrons that transfer charges from molecule to molecule. This mobile charge transfer all along the blue surface distinguishes ultramarine from all other blue pigments. We think that it explains the spatially receding, delocalized effect of the blue surfaces.

Also worth mentioning is the bright white-to yellow fluorescence of the pigment in the long-wave UV range. It allows ultramarine to absorb energy that is invisible to us and convert it to visible light. This brightening effect coupled to the blue reflections make ultramarine the perfect optical brightener for white shirts, for yellowed laundry, for the paper industry - and for shady spaces. 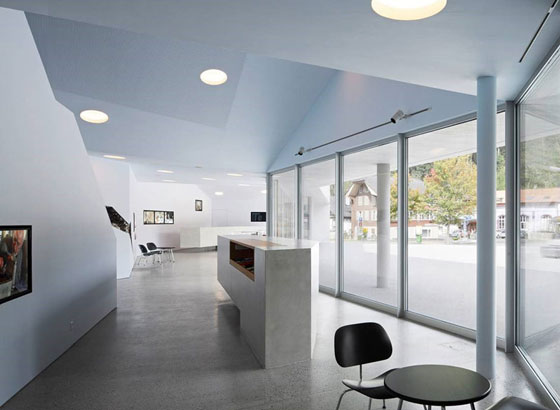 This celestial chemistry as well as the fluorescence reaction and delocalized energy are powerful tools for the color designer. They lend ultramarine and lapis lazuli the ability to visually widen narrow spaces and to brighten shadowed areas. The entire ultramarine palette can be used without hesitation in rooms that are narrow and for spaces that have little daylight. Low ceilings will look lighter, and they will appear to recede, but this ability to hide and conceal can be irritating if constructive elements of the architecture are painted with ultramarine. They will look non-supportive and weightless, which is good for a low ceiling but irritating on a pillar or chair leg, for example. Another important consideration is the sensitivity of our circadian rhythm to blue light. Blue reflections tell us, "It's daytime," and ultramarine, with its mimicry of the blue sky, tells us to wake up quite clearly. This makes our deepest ultramarine blue a great color for a conference room, but steer clear of it in a bedroom.

We love ultramarine because it allows us to create a magical series of paint colors that give the impression of infinite freedom in a limited space.